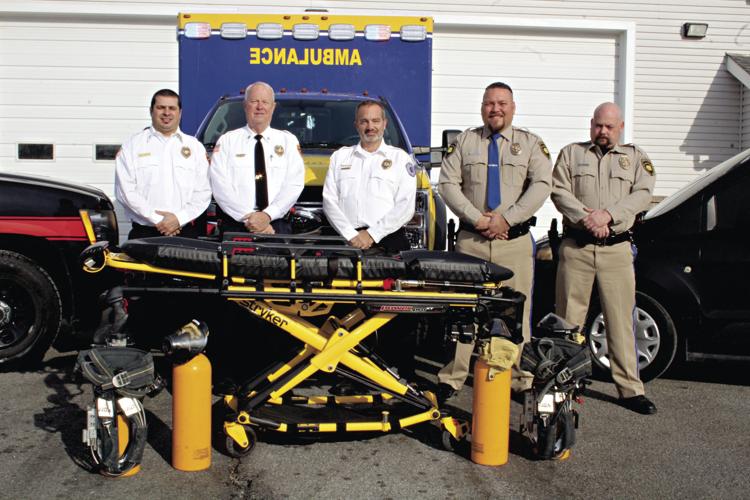 The stretcher prices in at around $16,000 while each individual SCBA is worth approximately $3,500.

“These departments have been great to us since we started. We haven’t been here for a very long time, and they’ve been really great about supporting what we’re doing, the administrators and the departments as a whole,” Parker said about the ambulance and fire districts who made donations. “And I look forward to working with other departments including these departments in the future to try and expand and make this a streamlined division of our county.”

“We’ve just recognized that in the past and even now there’s a need for better equipment, for a lot of things,” Ray Antonacci said, Chief Administrator for the LCAD. “And these guys are really taking the bull by the horns so to speak and making the improvements that they need.”

These donations are just one part of Parker’s plans to grow the Coroner’s Office into a more independent department. Parker said that the Coroner’s Office has not had a budget update since 1982, and understandably most of the department’s equipment was either outdated or nonexistent when he was appointed by the Governor in September (the previous coroner retired).

“To me, nobody in a law enforcement capacity has ever run the Coroner’s Office, it’s always been people that have a lot of medical background,” Parker said, who also works full time as a K9 handler for the Lincoln County Sheriff’s Office. “I have some medical background, but my deputy coroner is a paramedic, James Johnson. So he kinda comes in and brings the medical aspect where I bring the investigative aspect, together, we work really well as a team investigating deaths.

“But I just think that somebody has to get in who has the passion and who has the will to expand. And I want these departments to grow because the more they grow the better we are able to serve our community. The citizens of the county deserve that, they deserve people that have passed away in the family to be treated with respect, and the better equipment we have, the more equipment that we have the easier it is for us to do that.”

The Coroner’s Office handles around 350 individuals every year, and Parker explained that their jurisdiction covers any death that occurs as a result of something that took place in the county. The new stretcher will help in safely moving bodies between locations, and the SCBA will keep coroner officers safe while investigating death scenes that have potentially dangerous atmospheres. Since September, the office has already acquired new uniforms, a cot cover donated by a Troy funeral home that has the American flag printed on one side so as to respectfully move veterans and a new van for transporting people in the office’s care. Parker shared that all the members of the County Commission are supportive of budget increases, and he hopes in the future to also get an ambulance, scuba gear, and a cadaver-trained K9. Beyond new equipment, Parker also plans to take advantage of an indigent budget built into the current budget that has not been taken advantage of in the past.